skip to main | skip to sidebar

Gramps is not the only one who gets to post all the fun stuff ... Ladies and Gentlemen, Here she is now: The Baby, The Princess 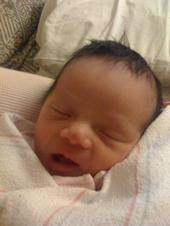 For those of you who have yet to discover this feeling; It is the best! To hold this lil' bundle of sweetness, to cover her with kisses, to smell the freshness of a clean diaper and yes, even to hear her cry. Grandma loves it - I love it ALL!!

She has the tiniest little button nose. The perfect little lips and man, oh man does she love to snuggle. I like to believe that she knows my voice already. She does open her eyes when I talk to her.

They say that parenthood is bliss - let me tell you, being a Grandma ~ this is Heaven!
Posted by I'm a Grandma, Now! at 3:08 PM 8 comments:

May I Have Your Attention, Please

Xboy will have to wait. I have an announcement to make.

There is a baby in the house!

She is beautiful and perfect, and I am much happier about this development than I expected to be. Sure, I thought I would be pleased to see my granddaughter. I just didn’t know how intensely happy I would be. I remember crying in the middle of the night and dirty diapers and the constant need for attention even after a long, exhausting day at work.

I forgot about the magic of a tiny, perfect little life in my arms. I forgot about the tiny yawns and the soft breath and the absolute peace of an infant’s slumber. And I never before knew what it was to be a grandparent. It is a different feeling, knowing the joy without the stress and fear of the ultimate responsibility.

It was a wonderful thing to wake up this morning with Granny bringing that girl into our room for some snuggling before I had to get ready for work. It is a wonderful thing knowing I’ll go home later today to watch her sleep on her mother’s chest.

I should add, with perfect objectivity, that my granddaughter is the most beautiful baby alive. I told my daughter after the long, hard labor, that I was glad she didn’t get one of those ugly babies. She did well. Despite my fears and frustrations, despite the poor choices that got her into this, she did well.

Unexpectedly, the baby’s father was at the delivery. We didn’t expect him to show, but he did. And he passed out! That’s my favorite part of the story. The guy passed out, and they had to revive him with smelling salts. I want someone to tell that story at my funeral.

My second favorite story was from yesterday. Instead of cigars, I’m passing out bottles of beer in celebration. I made pink labels with the baby’s name, date of birth and weight. When I was in the store yesterday buying the beer to celebrate my granddaughter’s birth, the checker asked for my ID!

Labels: getting old, the baby, WOW

And Now, Meet the Drama Queen

Since there is nothing else to do while we await the arrival of grandchild number one, perhaps this is the perfect time to introduce the other migrane machines--I mean “adorable teenagers”--in our life.

You already know something about The Daughter, who is soon to give us The Granddaughter. She is Granny’s oldest. Granny’s other bundle of joy is a high school sophomore we’ll call The Drama Queen, for reasons that will soon become obvious.

Our lovely Drama Queen--like her mother and sister, she is lovely--has only two settings: Totally Drama and Comatose. The Totally Drama setting is on whenever she is awake. At this setting, everything is critically important, and everything is an emergency.

Let’s say, for example, that Gramps eats her two-day-old half-eaten hamburger out of the refrigerator. Her response, in a loud, high pitched voice that wakes up the neighbor’s cat three blocks away, will include the following significant facts:

Listen in to this representative conversation between Drama Queen and Granny-to-be:

DQ: Can you pick my friends and me up from the movies on Thursday?
G: Thursday? You mean Thanksgiving Day?
DQ: Yeah, I guess.
G: That is a family day. You’re not going out with your friends.
DQ: Oh my God, Mom! I have plans!
G: It’s Thanksgiving Day, for heaven’s sake. We have plans on Thanksgiving Day every year. Didn’t you think of that?
DQ: But Mom, you know I wanted to do this for a long time.
G: You’re staying home with us.
DQ: That’s not fair!
G: Nevertheless, that’s what’s happening.
DQ: You never let me do what I want. This is so not fair. I’m so mad my whole body is shaking. I want to scream.
G: Yes, dear, that’s nice.
DQ: Ooooh, I’m so mad. That’s not fair. (Stomps off down the hall.)

And that’s our middle child in a nutshell. Her entire world crashes down around her every day, but somehow she just manages to keep it together until the next big crisis, such as when her trollish parents won’t give her a birthday party worthy of MTV’s My Super Sweet 16.

NEXT TIME: Meet the final member of the cast, my son, who believes that life, liberty, the pursuit of happiness and eight hours a day of uninterrupted Xbox time are all natural human rights. Let’s call him Xboy.

There should be a new addition to our household within four weeks.

I will admit that I have had some pleasant moments daydreaming about teaching my young granddaughter about the infield fly rule, reading to her, taking walks with her and watching birds in our backyard together. (Do you think she has to learn how to walk before she can learn to chase cats?) Nevertheless, her arrival will mark the beginning of an extremely stressful transition. That is the nature of things, even in the best of circumstances.

In the last couple of weeks, we are getting not-so-subtle hints that this may not be the best of circumstances. Start with a healthy dose of teenage drama, stir in a hormonal girl with a baby on the way, add a dash of young man with the common sense of earwax, broil over a half dozen angry late-night telephone conversations, and you have a potent stew that will make your stomach turn.

Yes, for about the sixth time since my daughter became pregnant, she and the father of the child have broken off all contact. This has been the most angry and bitter of the breakups to date. There is a possibility that they will never attempt to patch things up. But the odds are also good that within a few weeks, my daughter will be convinced she can never live without the boy.

One of the issues is child support. He doesn’t think he should be saddled with the indignity of being forced by the state to pay. My daughter should trust him to do the right thing, he says. I’d be more convinced if he were already doing the right thing by his first child. He has a track record, all right, and he’s dropped the baton every time.

Due to his anger (perhaps fear?) over the possibility of being forced to pay his fair share as well as the results of a few other games that high school kids know how to play so well, venom is being sprayed liberally in both directions. I really hope that by the time my granddaughter is old enough to understand what is going on in the world, my daughter and the father will have at least learned to be civil. No child should ever witness that sort of hatred between parents. It makes me sad to think that my granddaughter might be so abused.

In one conversation, the boy first said that if he had to pay child support, he wouldn’t ever have anything to do with the child. Then, in the next breath, he said he’d go to court to get custody of her. You can imagine that shook up my daughter more than a little bit. At this point, she doesn’t want him to have anything to do with the child. And all this with less than a month to go.

My belief is that someday these two kids will settle down and mature enough to figure out that doing right by their daughter is their first responsibility. I just hope they learn that lesson before they do too much damage to this little girl who doesn’t deserve any of it.
Posted by Gramps at 12:41 PM 6 comments: