skip to main | skip to sidebar

Gramps and The Baby Boomer 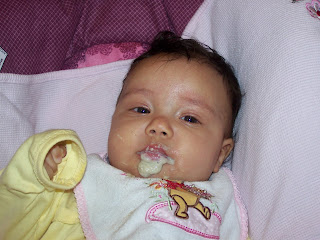 There's really not too much to report from the world of Granny and Gramps.
The oldest daughter is a GREAT mother - she goes to school, does her nursing clinicals and gives the Granddaughter so much attention, we rarely hear any loud, piercing screams of hunger. Actually, it is a very nice - the ability to wake up almost every morning hearing coos of baby laughter.
Our Drama Queen - is still our Drama Queen. I took her to the eye doctor for the much anticipated contact fitting the other day. The dr. put the contacts into her eyes:
"Mom - it feels like there is a piece of plastic sitting on my eyeball."
"Uh, dear - THERE IS A PIECE OF PLASTIC SITTING ON YOUR EYEBALL!"
"Oh. Grandma says I get my drama attitude from you. Do you think?"
"Ughhhhh."
Xbox Boy and Gramps are killin' me with "Left for Dead." Now, I've seen Gramps postings about the Zombies ... and I've seen his latest "ha!" towards Grandma and her playing Luxor; and despite his posting, that evil xbox system does NOT control my life - not like it does theirs.
Recently the oldest daughter upgraded her cell phone to the new TMobile "G1". It is a pretty cool phone with lots of neat games and other texting/calling capabilities ... My husband/My son - they found the "Zombie Finder" Yes, this phone will act as a mapping device and it shows us how close proximity the zombies are to our home.

And take 2am this morning for example. Gramps can't sleep. Where do you think he is? Yep, you got it - Killing Zombies! Why can't he do something productive at 2am? Ladies, You know what I mean - it would be nice if he would empty/load the dishwasher ... clean out the kitchen cupboards ... do a load of laundry - you know, the helpful stuff! Nope - He is KILLING Zombies!

Proving my point ... I have attached a recent picture of the Granddaughter. In this picture, Granny is feeding Ms Adorable her first cereal ... Gramps is in the background taking pictures and teaching her the sounds of the Dreaded Baby Boomer (again, from XBox - Left for Dead) ....

Oh sure, we all hate zombies, don't we? But they really irk Granny these days. The reason is Left 4 Dead. This Xbox game is my latest passion. Xboy and I have wasted...er, I mean "invested"...many, many hours in this latest imagination of a zombie apocalypse. 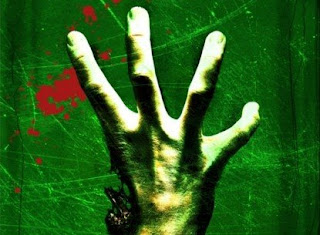 In the game, players take control of one of four human survivors--Bill, Francis, Louis or Zoey--and shoot, punch and burn their way through hordes of deliciously angry zombies to safety. The game has everything--gunpowder, explosions, body parts flying everywhere, and lots and lots of zombie blood. And that's just regular play. 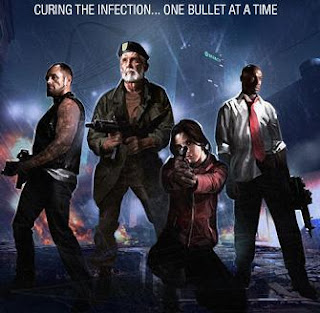 The heroes--Francis, Bill, Zoey and Louis

If you play online, you get to play as one of the special zombies--hunters, smokers, boomers and tanks. These specials have unique skills and are quite powerful. If there is one thing better than blowing away hundreds of zombies to reach safety, it's ganging up on four puny human beings and hacking, strangling and pounding them into oblivion. 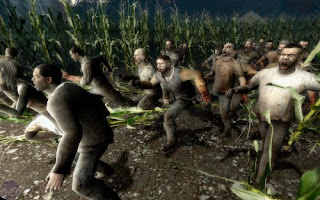 It is so good I have even created a diary of a survivor on a separate blog (When the Dead Rise Up), in case you are interested in important tips about killing zombies. Go over there every once in a while for some bloody undead fiction.

The Pot and the Kettle

You may recall that I am an Xbox aficionado. I could play for days on end, taking breaks only to use the bathroom and get more beer from the fridge. But you have to understand, I am in complete control of my Xbox play and can stop any time I want.

You may have gotten a different impression if you read Granny's comments about how evil the Xbox is and that it takes her husband and son away from her all weekend. She claimed that if she had her way, she would smash the vile machine into a million bits. Keep that in mind as you enjoy the following picture. 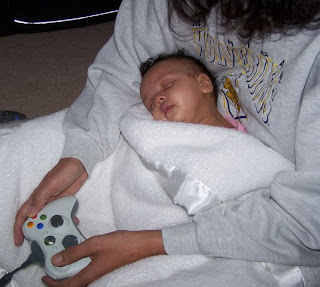 Yes, that adorable sleeping child in the photo is The Granddaughter. And the woman playing Xbox while cradling that child? Granny.

You see, Santa Claus brought an Xbox game for Granny that included Luxor. I don't get the appeal of Luxor, mostly because there isn't any gunpowder involved. Granny, however, can't get enough of it. Since Christmas, her children have been complaining about the time Granny spends in front of the television playing Xbox, the game system she called "evil."

I think a retraction of Granny's previous statements is in order. Don't you?
Posted by Gramps at 1:11 PM 3 comments:

A Clueless Daughter, a Snot-Nosed Brat and a Smile

Disclaimer: The contents of this post are in no way intended to indicate that my commitment to my curmudgeony manner has decreased.

Two small episodes made me smile in the last 12 hours. The first occurred as Granny and I were going to bed. Through our closed bedroom door, we could hear our frickin' adorable granddaughter talking happily to herself. This went on for several minutes nonstop. Granny went into The Daughter's room to grab a midnight snack of that baby goodness. She came back chuckling to herself.

"Did you hear what your daughter said?"

"Your daughter said, 'Mom, the baby is not going to sleep. Her bedtime is 9:30.'" Isn't that great? The Daughter has given her 3-month-old child a bedtime! Hilarious.

Then, this morning, I was driving to work and stopped at a light. A woman pushing a stroller walked across the crosswalk. Her snot-nosed three-year-old (No, I do not know he was three. What are you, the Accuracy in Blogging Police?) held her hand and as he passed me, looked up at me.

I did something that is completely out of character for me. I smiled. He smiled back and waved. It changed the whole tone of my day. Something as little as a smile made a difference. That was nice. (And if you ever tell a soul about this, I'll cut you into little pieces and feed you to Dick Cheney.)
Posted by Gramps at 10:59 AM 6 comments:

Labels: curmudgeon, the baby, the daughter

On Being the Creepy Grandpa

I am too young to be old. My back has betrayed me. My daughter has made me a grandparent. When I was playing basketball and we split up into the old guys vs. the young guys, no one had even a fleeting thought that I should be with the young guys.

But I'm only 40, and every once in a while there is a moment that fools me into believing I'm not yet over the hill. You may recall my story about buying beer to celebrate my granddaughter's birth. The cashier asked to see my ID.

The fact that I am a young grandfather, however, has a creepier side to it.

On Monday, I went with The Daughter to re-enroll her in the high school. She had taken the Fall semester off in order to have the baby. (I am happy to say that due to some hard work on her part, she managed to make up the lost units and is ready to graduate on time.) She needed a parent to go along to sign the paperwork and, as it turned out, to carry the six tons of baby gear.

My 17-year-old daughter and I don't share any genes, so there is absolutely no family resemblance. There she is, merrily strolling down the hallway carrying her baby, and I am trudging behind carrying all the baby paraphernalia. To set the scene further, let me say that I was wearing blue jeans and an old flannel shirt. Since it was my day off and I had been sick, I just rolled out of bed without even bothering to comb my hair. I was looking very much like a first-class slacker. Though I am a 40-year-old slacker, I still sometimes have to show my ID to buy alcohol, mind you.

It may have been my imagination, but the looks I got--particularly from the adults--seemed designed to shame me into taking my own life. Particularly, they seemed to be communicating, "How dare you! How dare you corrupt such a young girl, you worthless SOB. You should be castrated on the spot."

Then we went into the dean's office. One of the deans came bustling by, and he saw my daughter. He had known about her pregnancy.

"Well hello," he said. "I was wondering how you were doing. Is this your baby?" I saw him casting glances my way, where I was sitting with the baby stuff.

And then he said, quietly, "Is this the baby daddy?"

My daughter responded even more quietly, and I couldn't make it out. I was hoping she was saying, "No, that's my dad, you imbecile."

Soon after, we got up to go into another office and the dean left. As he passed by me, he said, "You have a beautiful baby there."

I should have said, "Thank you. You do know I'm that girl's father, you imbecile." Instead, my powerful wit only works on Tuesdays and Thursdays, and so I just managed a weak smile. I had no idea what to say.

Later, I checked in with my daughter. She thought the dean was asking about the baby's father, and so she just said, "He's not involved."

I admitted that was the one part about her pregnancy that always made me uncomfortable. Whenever she and I went somewhere together, I had this feeling that people were looking at me as if I were some sort of monster for doing such a terrible thing to this young girl. She said I should get a shirt that says "I'm the grandpa."

It got me to wondering about whether I should start making an effort to look older. So today, I didn't shave. There are only a few gray hairs on my head, and it takes an effort to see them. My whiskers, though, are generously sprinkled with gray. Maybe that will work. Or, maybe I should just get over it. Why should I care whether or not people think I'm a lecherous monster?

I'm getting the damn tee-shirt.
Posted by Gramps at 3:52 PM 7 comments: